My experience with PICO-8 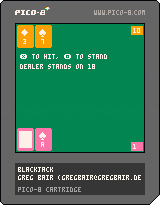 This weekend, I decided to try something different - programming a game in some esoteric environment. Since I don’t have a Commodore 64, I went with the PICO-8, and man did I have fun.

It reminded me a lot of programming in BASIC back in the day, typing in games from magazines and books.

I really liked at first the idea of programming inside the machine itself, but that quickly got tedious for me. Fortunately, the .p8 file is just a text file. The code language is a subset of Lua. I’d never coded in Lua before, but it’s a fun little scripting language.

The built-in sprite editor is really nice. Has all the basic things you’d want in a sprite editor, the ability to change the size of the sprites, etc. You can even export the sprites to a PNG!

I felt like learning the system with just the basic docs was quite difficult. I ended up getting a book, Game Development with PICO-8 that really helped. I also bookmarked the system manual which has good API docs in it.

There’s also no debugging method other than print(), so if you rely on debugging in an IDE or at the command line, tough. Most BASIC interpreters back in the day didn’t either, so no big loss there.

Ok, so where’s the game?⌗

I built a blackjack game! It’s super simple, aces are always 1, there’s no splitting, no insurance, nothing like that. It was really fun to build.

However, occasionally when starting/restarting the game, we get a nil reference to either one of the player’s cards or one of the dealer’s cards. Not sure what’s going on there, but I suspect I’m not doing some initialization correctly.